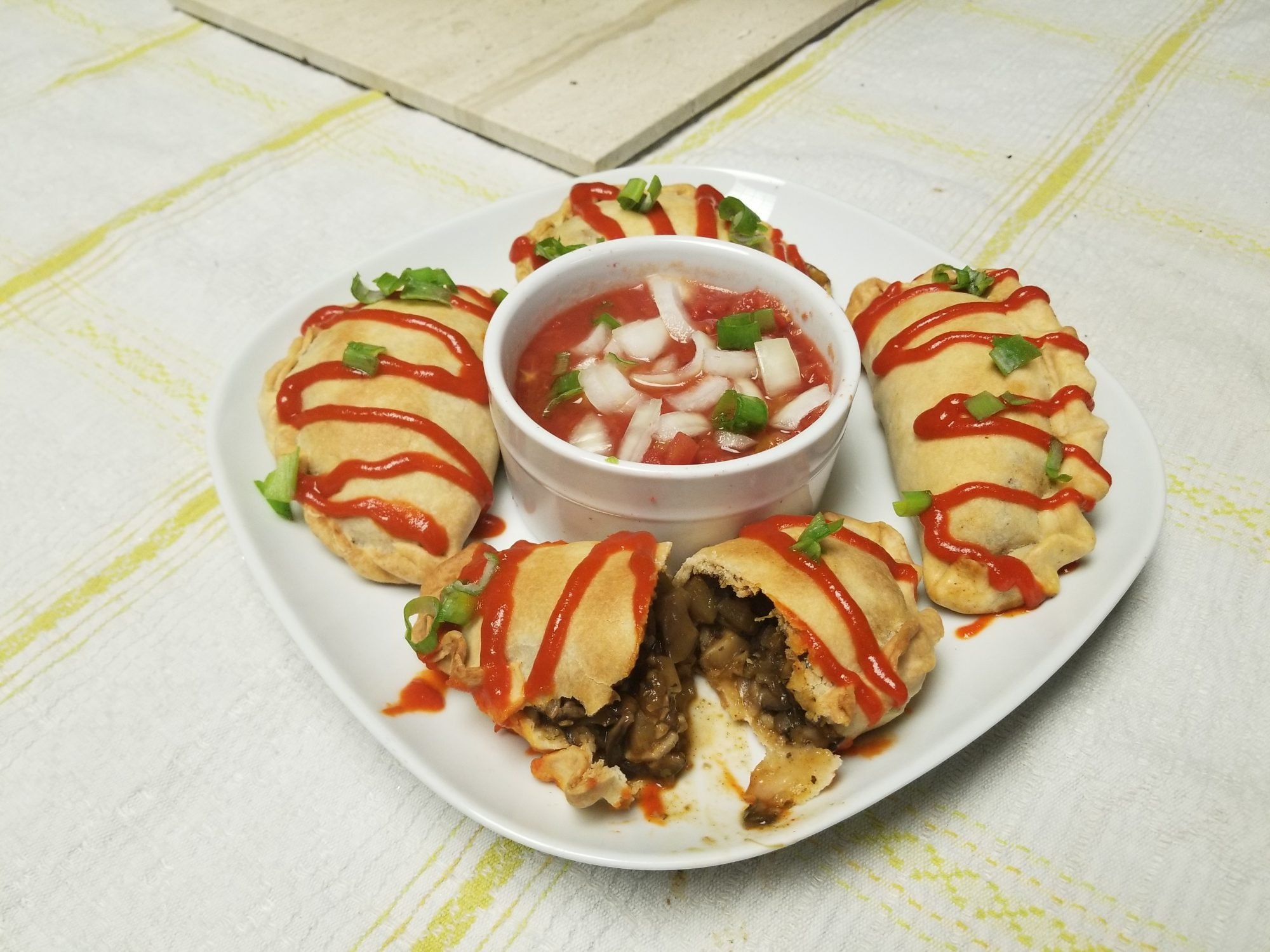 The star of this recipe is the flaky, easy-to-crimp dough from Viva Vegan! The flavor and texture of this dough is so good, you’ll wonder if you’re not at a professional bakery. Like most good pastry, the most important ingredient is time. This dough needs to be left to chill for at least four hours!

For a fast empanada without the wait time, you can try making it with the crusty corn dough from this recipe. I prefer the wheat version, but if you’re in a hurry the corn dough is excellent!

Gather your ingredients! This will be enough to make about 1 dozen empanadas half the side of your hand. 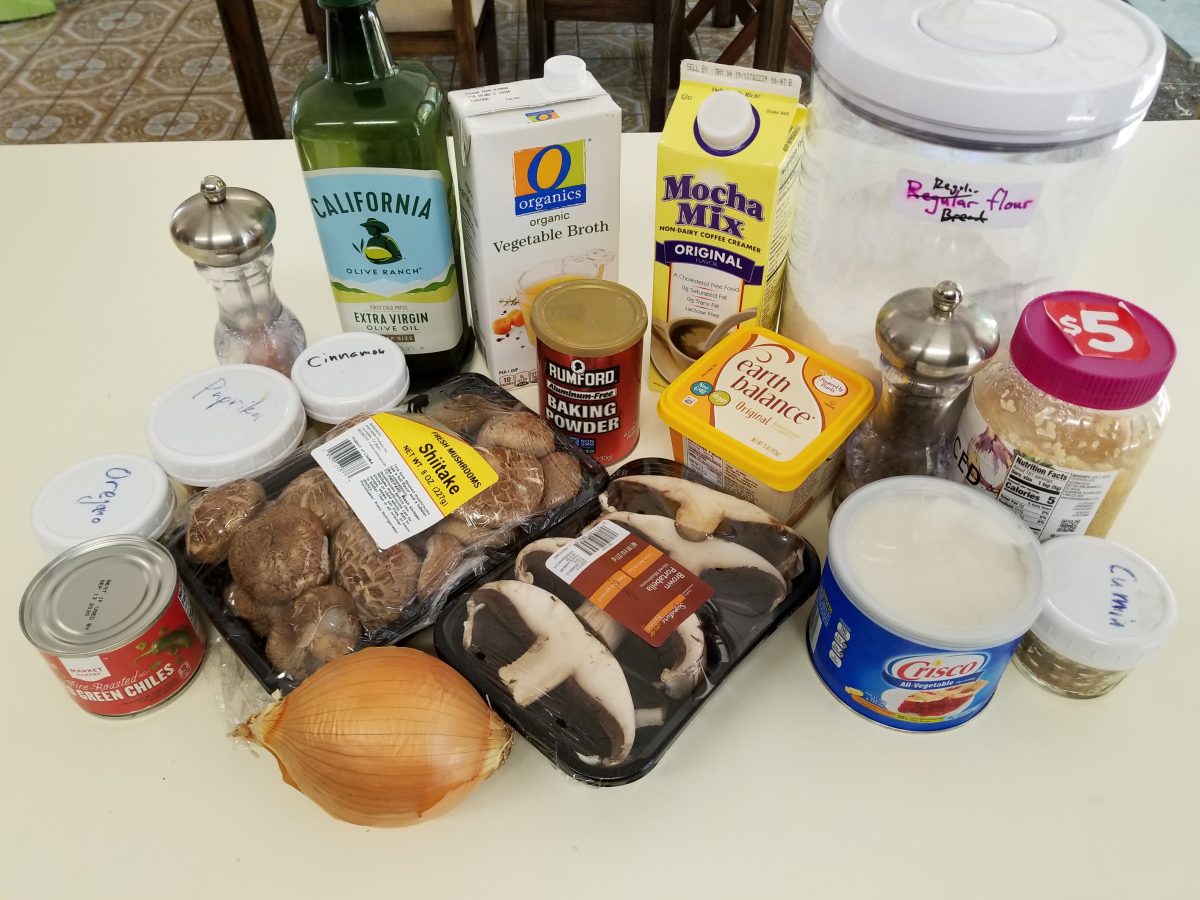 Put 3 cups of all purpose flour, 1 1/2 teaspoons salt, and 1/4 teaspoon of baking powder in a food processor. Pulse for a few seconds until they’re evenly mixed. 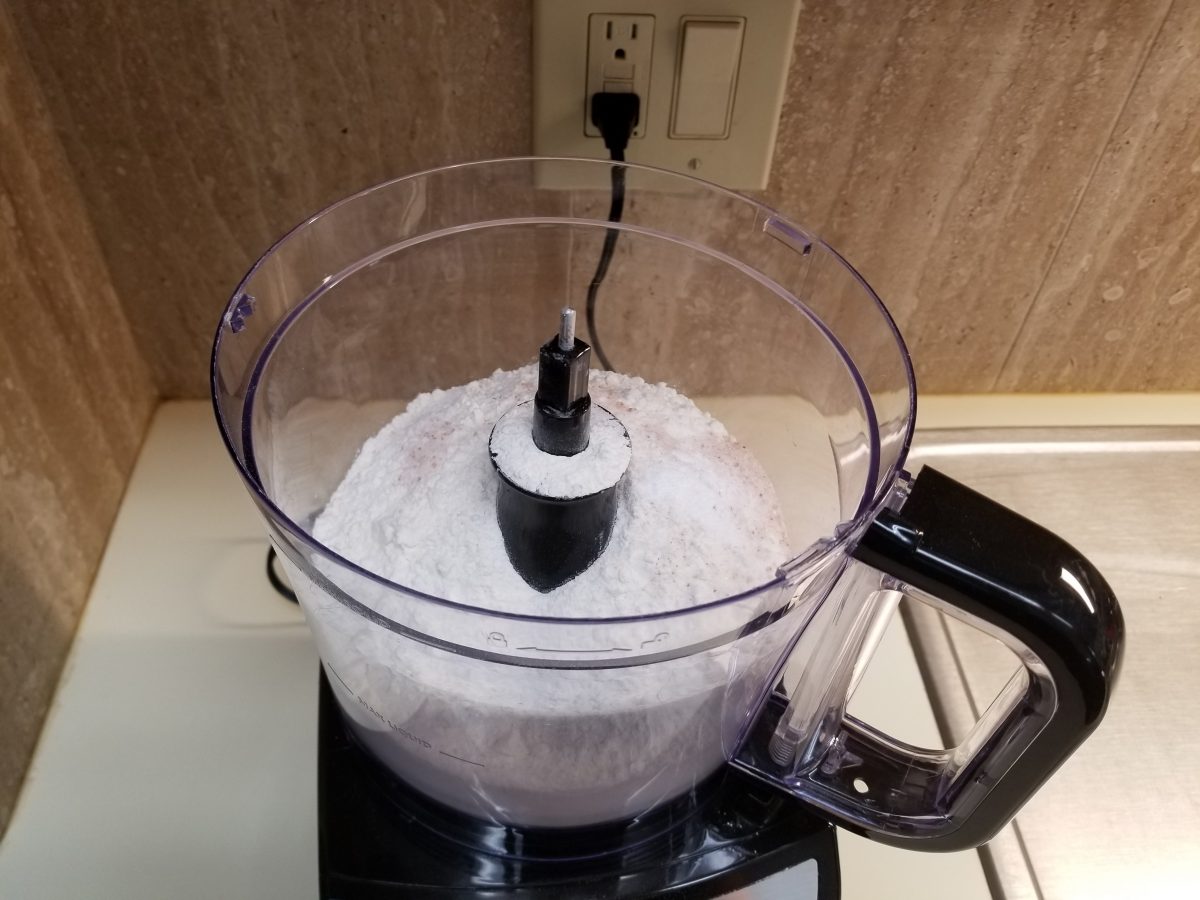 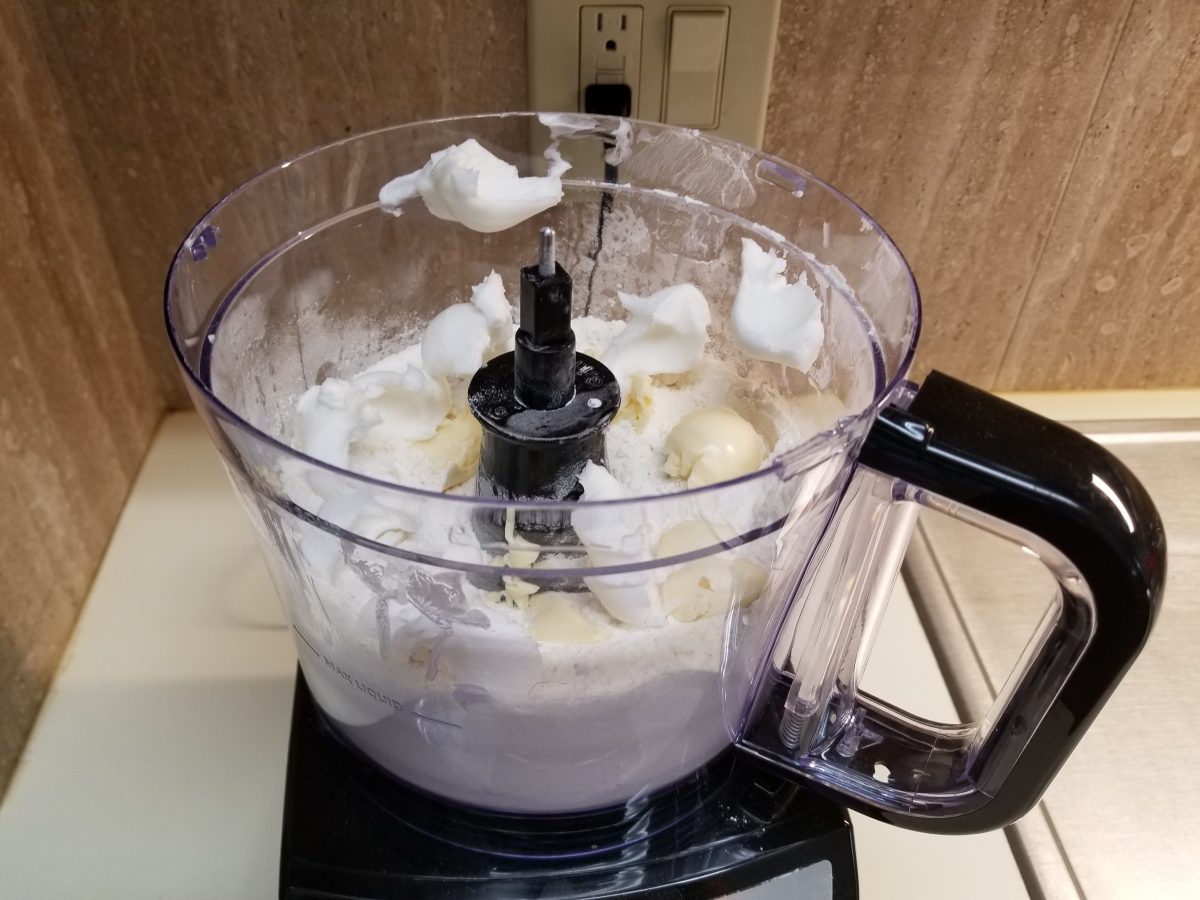 Pulse the dry ingredients and the fat together for about ten seconds until you get a grainy looking mixture like this. Move it into a large mixing bowl. 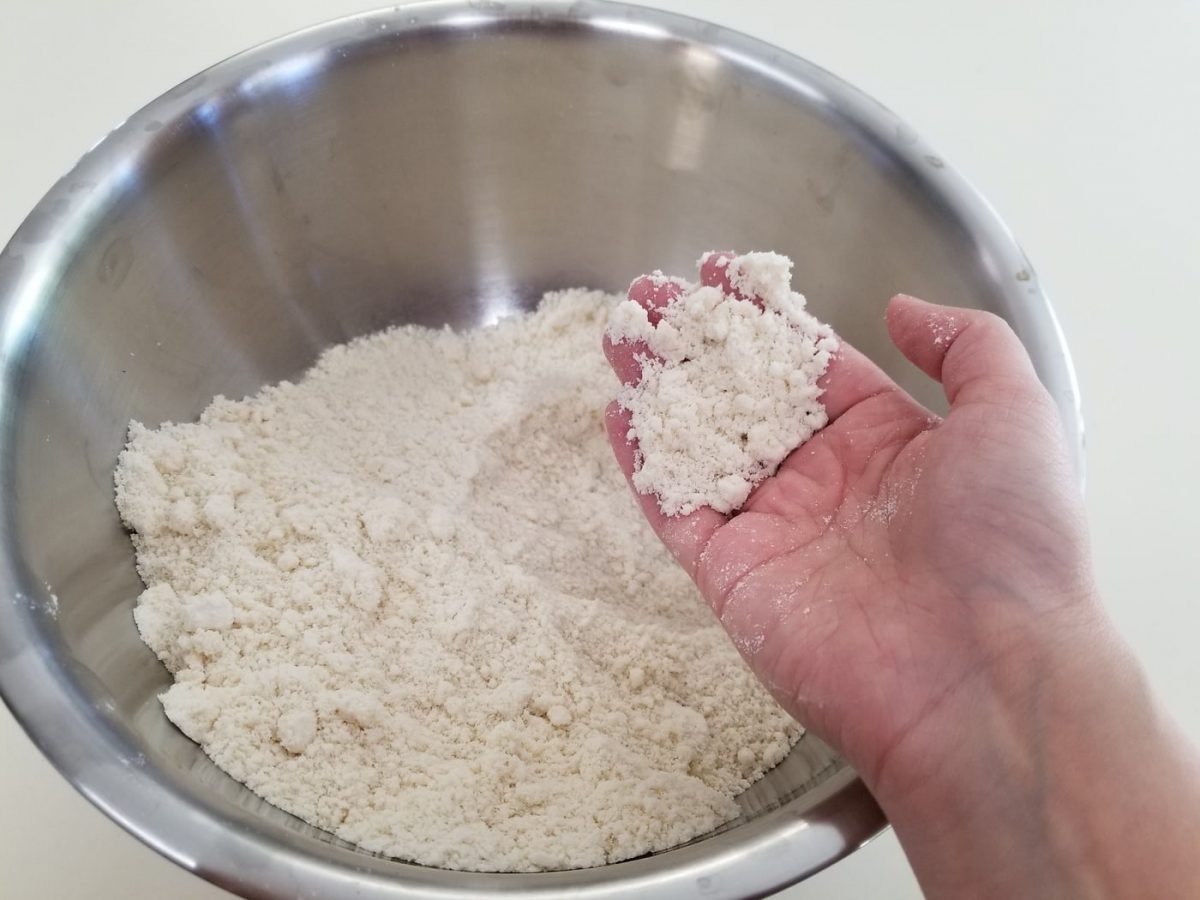 Stream in about 3/4 cup of cold water while kneading the dough with your fingers. Add just enough water so that you can press the mixture together to form a soft, stretchy dough with no cakey spots on the inside.

Do not over-work the dough, or it will get tough from forming gluten strands. You’ll want the dough as malleable as possible so that you can crimp a nice empanada seal later. Knead the dough just enough to dissolve all of the flour. 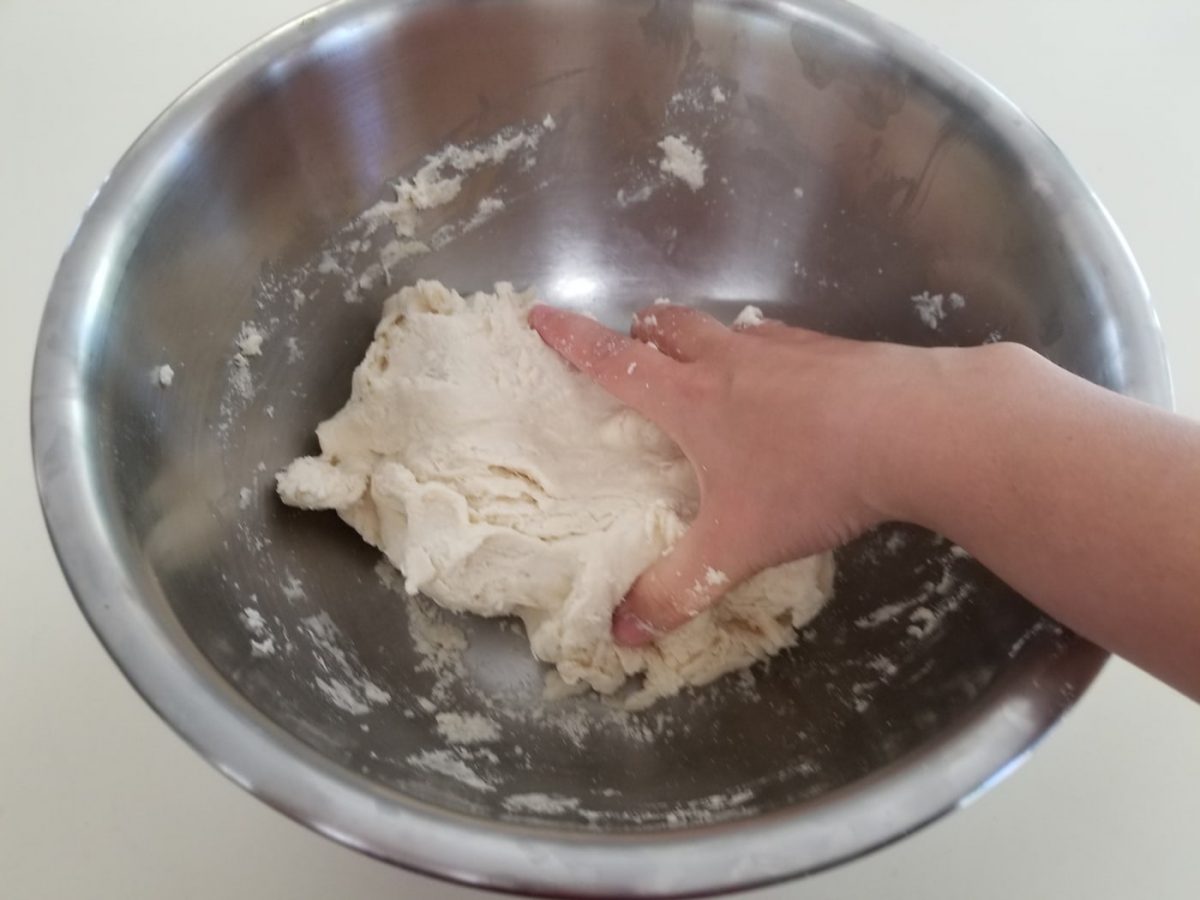 Split the dough in half, roll the halves into balls, and flatten them to the width of a bike tire. Wrap them tightly in cling wrap and place them in the fridge for at least four hours. Yes! Quite long. This is why I recommend making the dough the night before you plan to eat the empanadas.

Don’t skip this long resting step. If you follow through, you’ll end up with a malleable dough that bakes into a wonderfully flaky wrap. 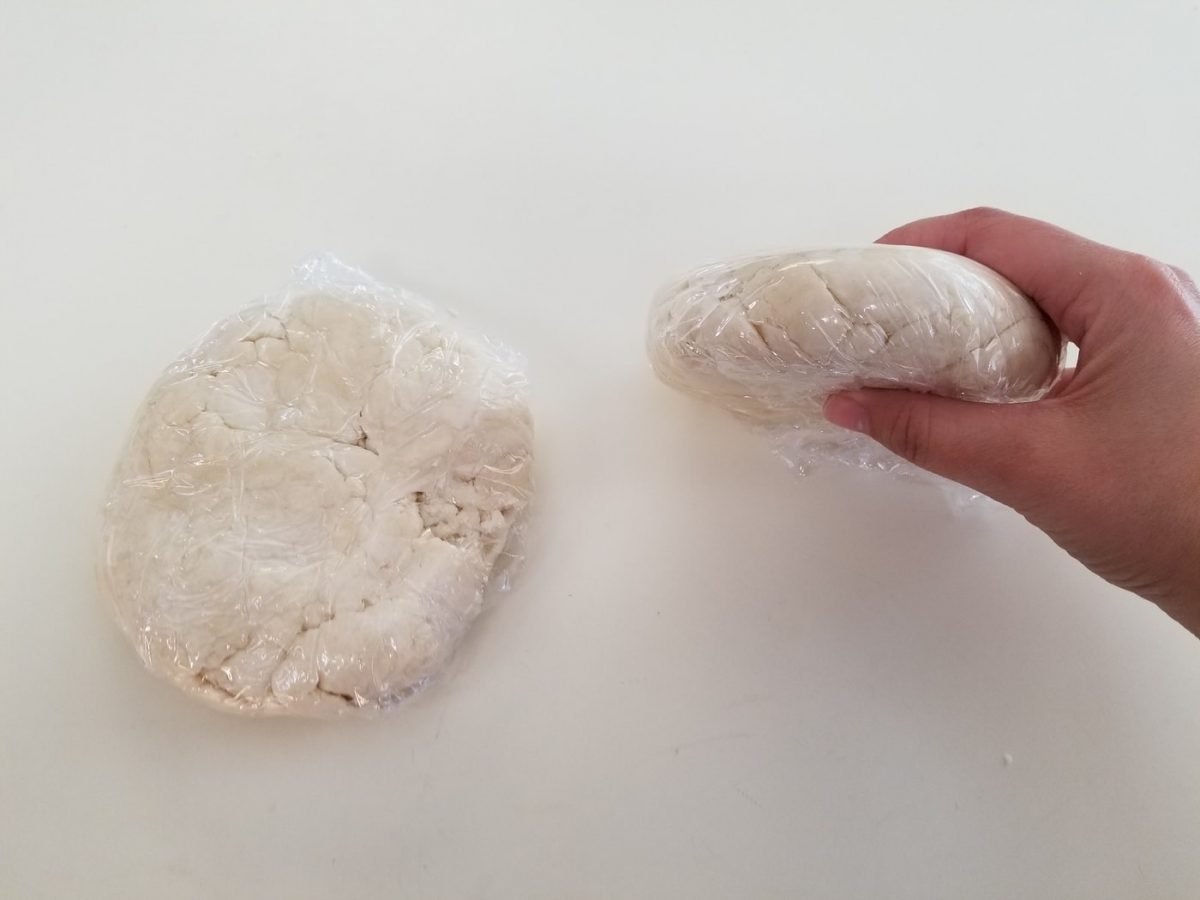 Four or more hours later, prepare a workspace to roll out the empanada wraps. Cut out 12 square pieces of wax paper, about 6″ by 6″, to separate the wraps from each other. Flour your counter, rolling pin, and hands. Clear a small space in your fridge for a small plate of stacked wraps. 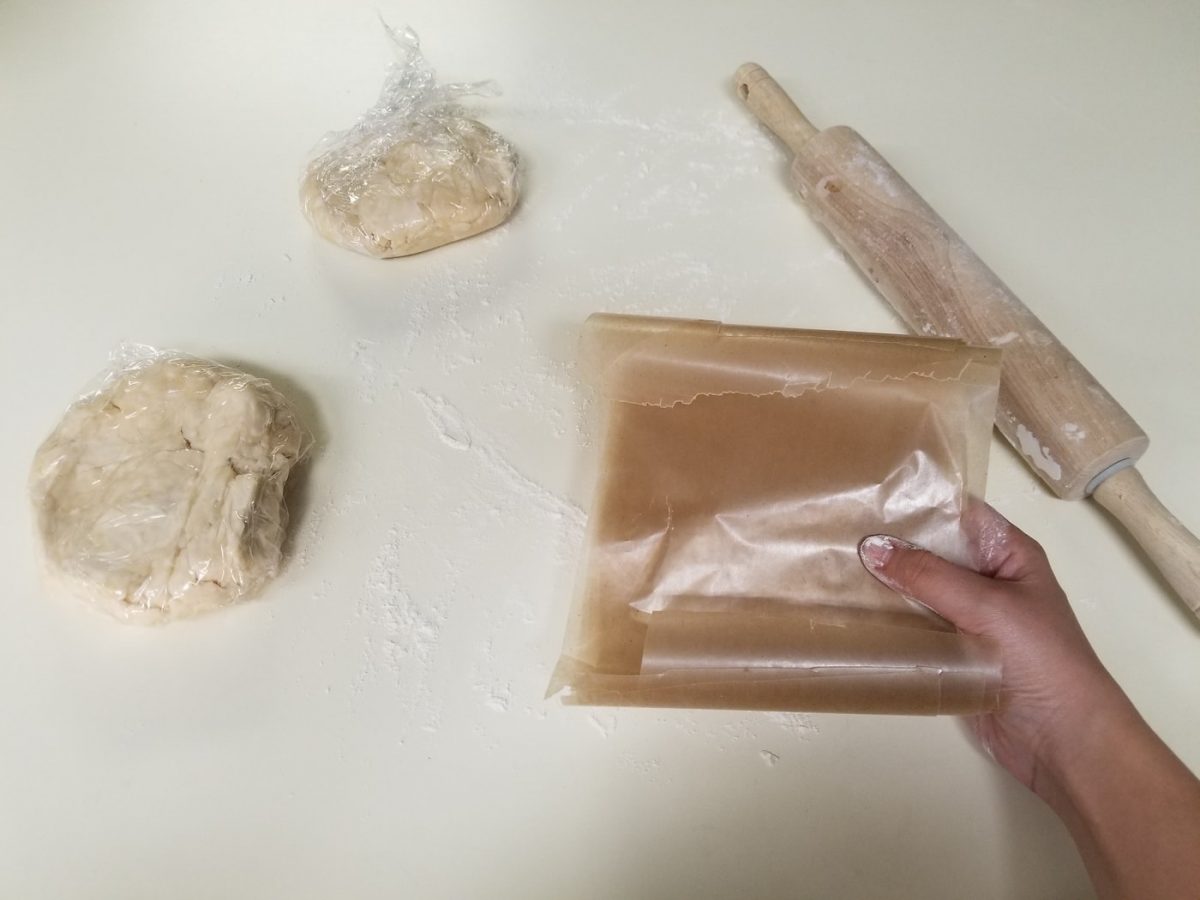 Cut the two discs of dough in half, and then divide those halves into thirds to make twelve roughly equal portions of dough. If the dough has turned out well, it should have a greasy, almost sweaty appearance that wasn’t there before resting. 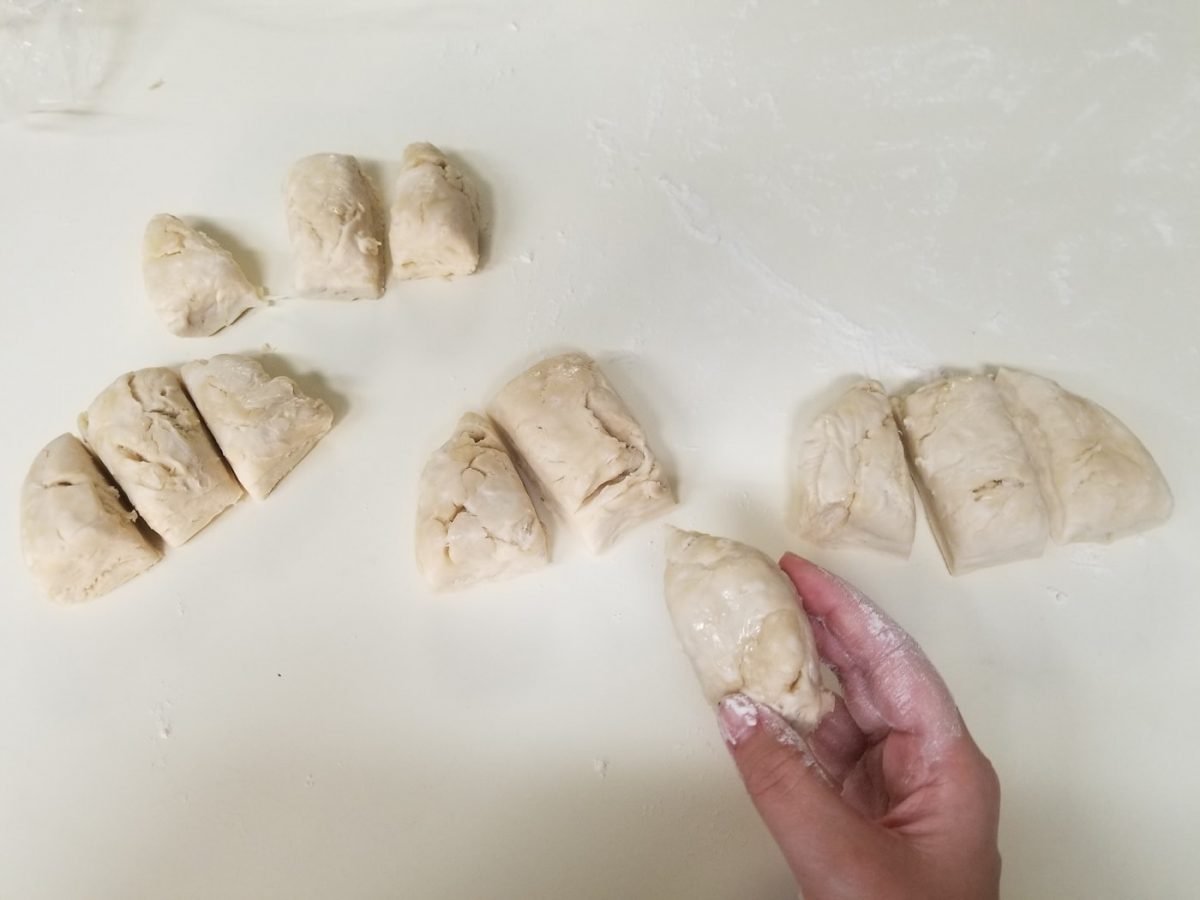 Take one of the dough pieces in your floured hands and roll into a meatball-sized sphere. Place it on the floured surface and roll it into a rough circle, a bit larger than 6″ in diameter, with your floured rolling pin. 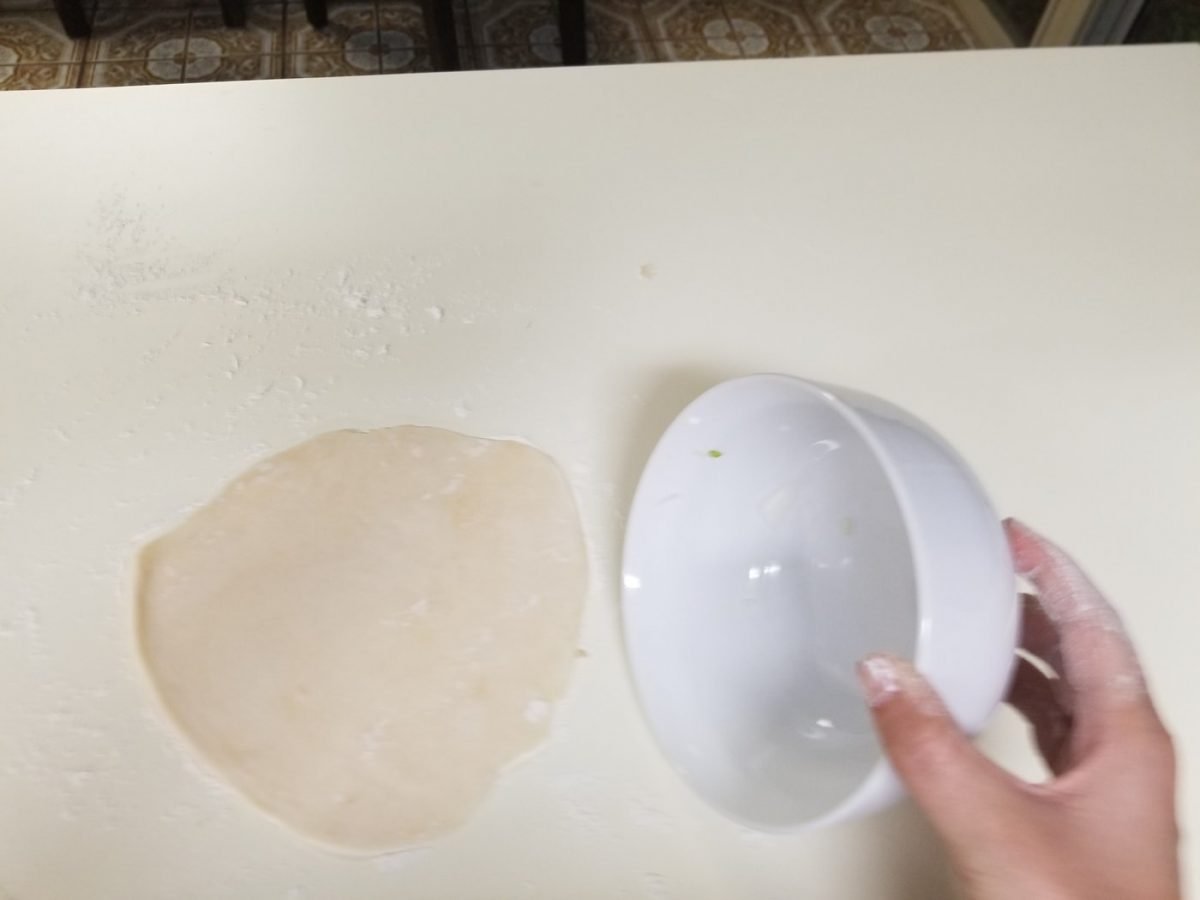 Press a 6″ bowl down on the rolled-out dough to make an even circle. Peel away the scraps from the edges and set the scraps aside to make an extra wrap or two. 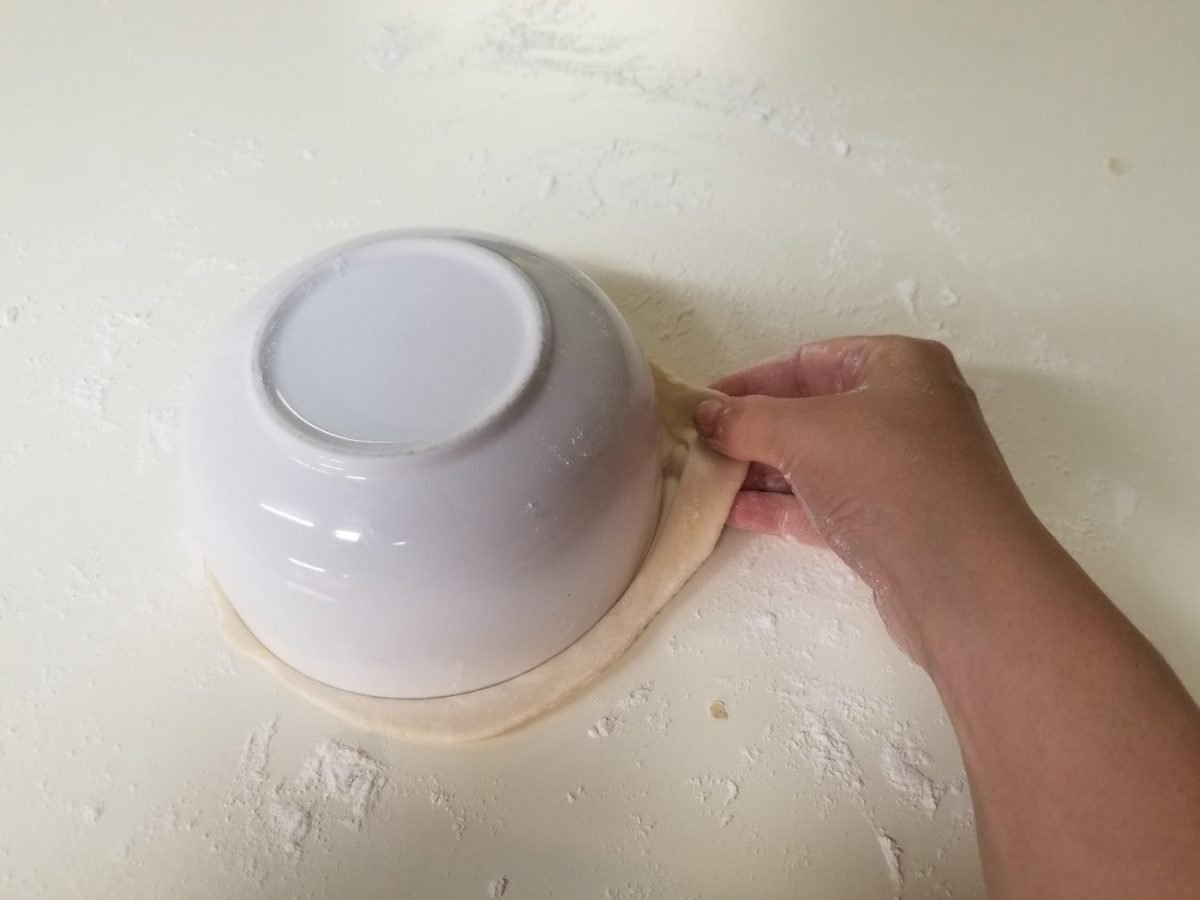 Place the finished empanada wrap on a wax paper square and quickly stow in the fridge. 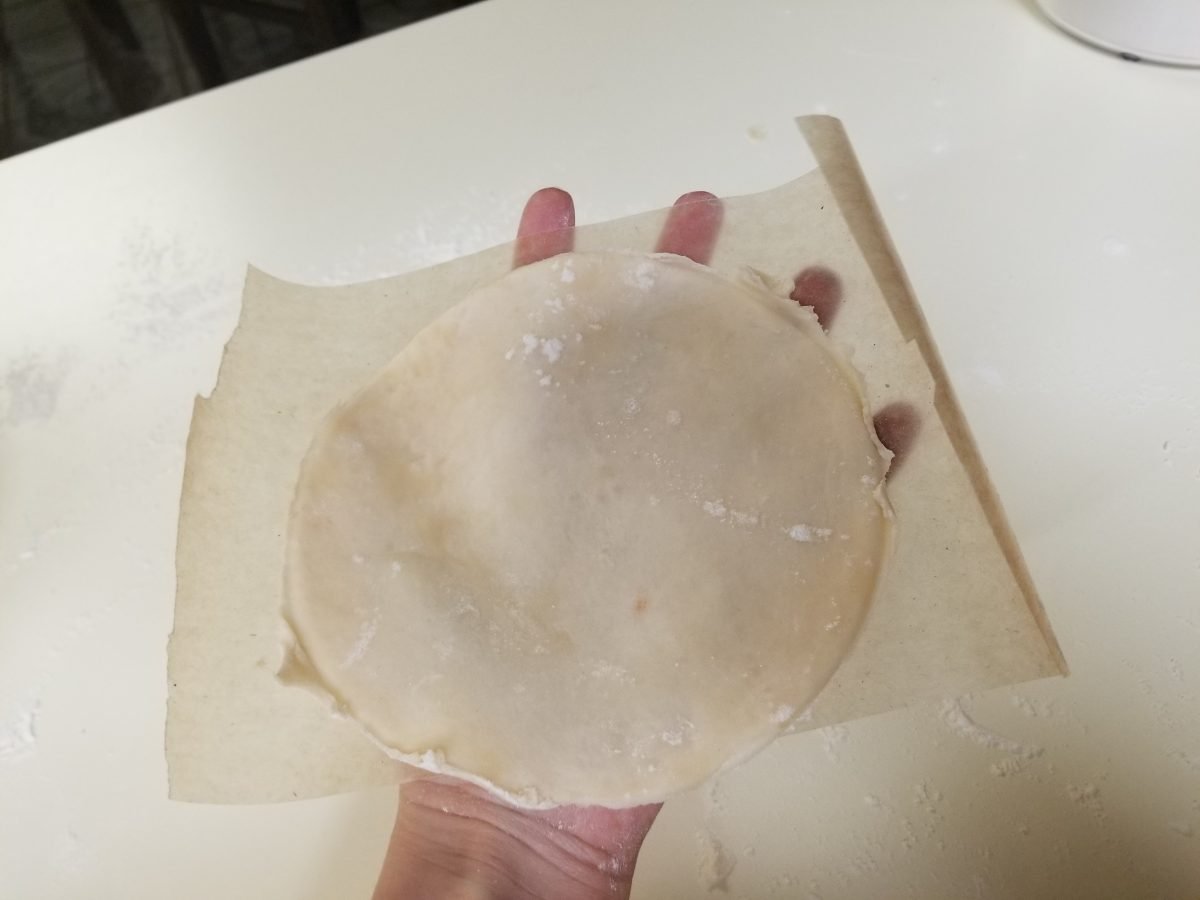 Repeat this for the rest of the dough paces. Stack the finished wraps in the fridge with wax paper between them, so they don’t stick together. Leave them in the fridge until the filing is ready to use. 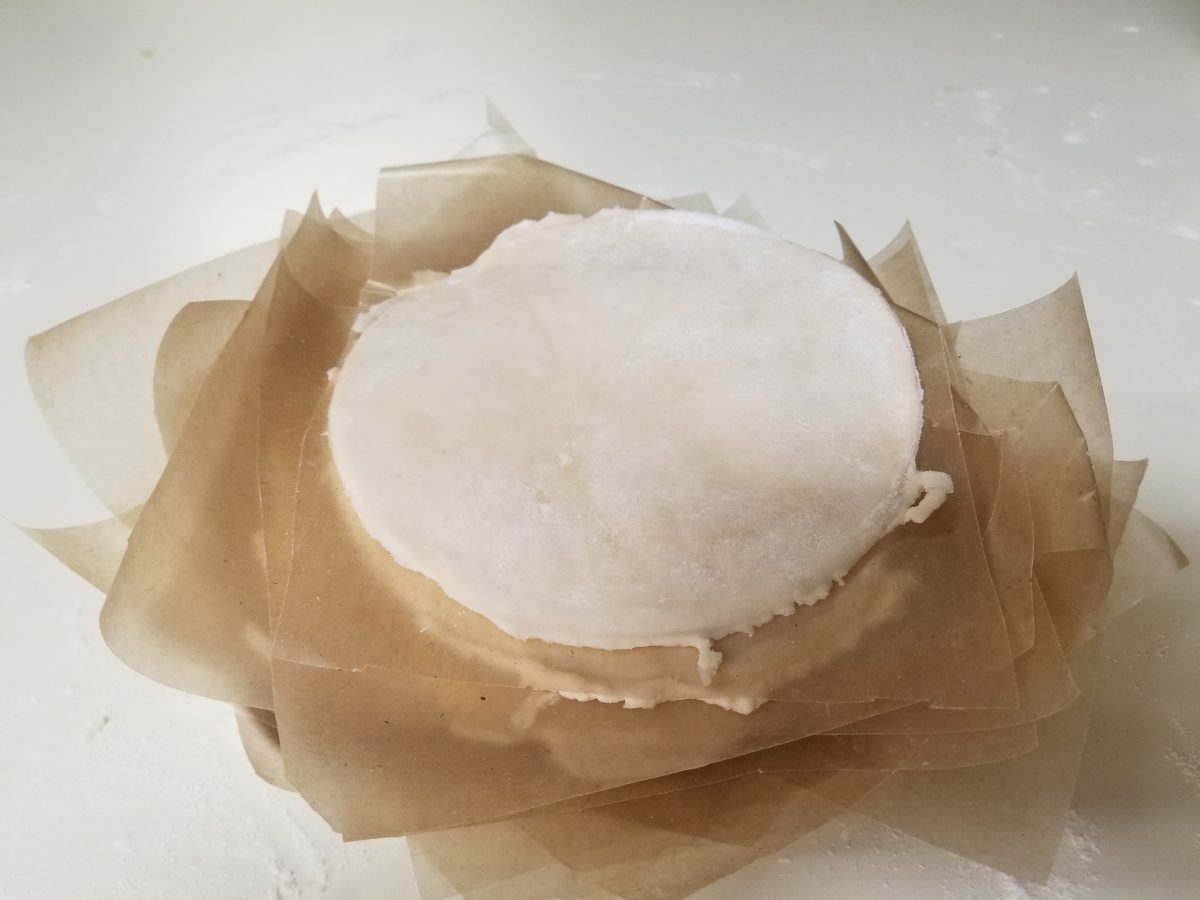 Start on the empanada filling by finely dicing the 16 oz of mushrooms and 1/2 lb of onion. For the mushrooms you choose, any type has its own appeal, but shiitake is king in my book! I’ve chosen 8 oz of flavorful shiitake and 8 oz of affordable portabella.

You don’t want your mushroom chunks to be too big, or you won’t be able to roll a neat empanada. 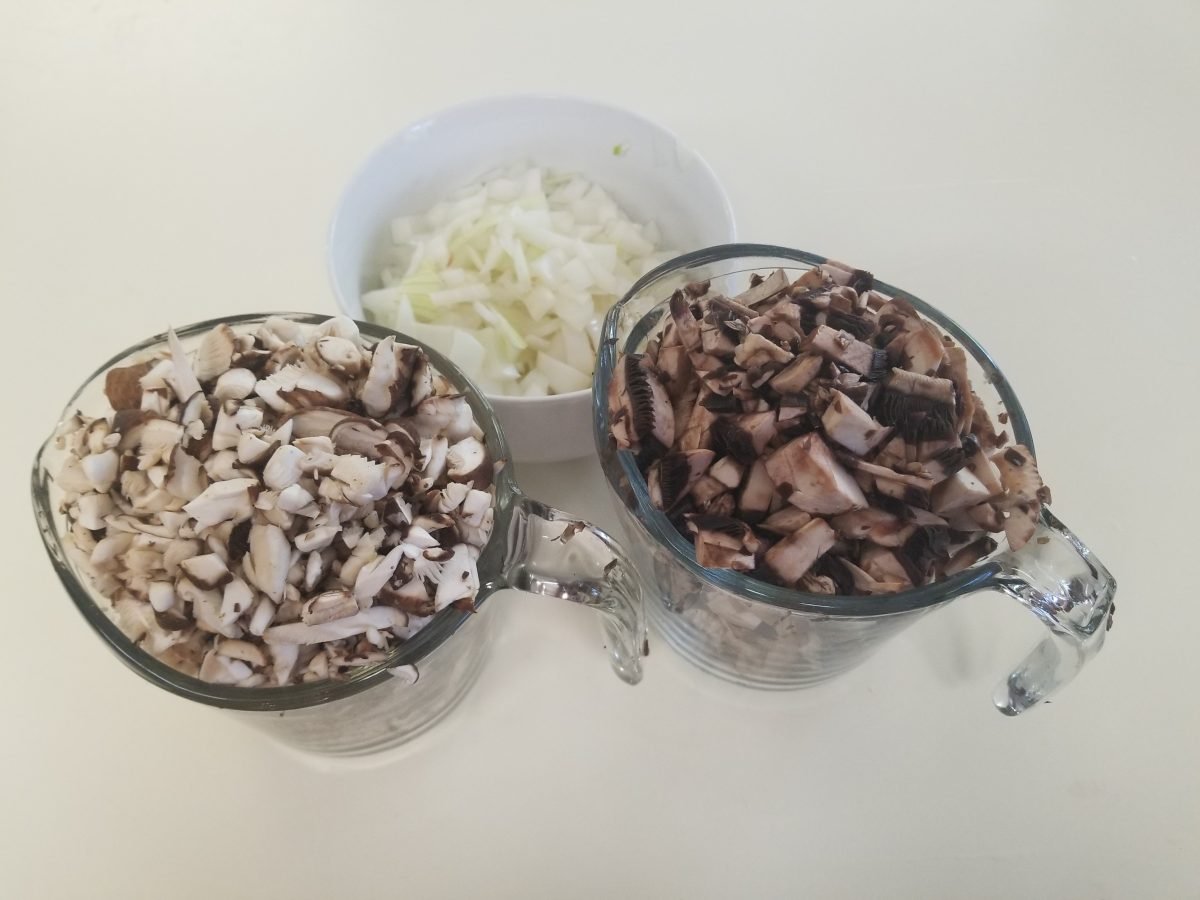 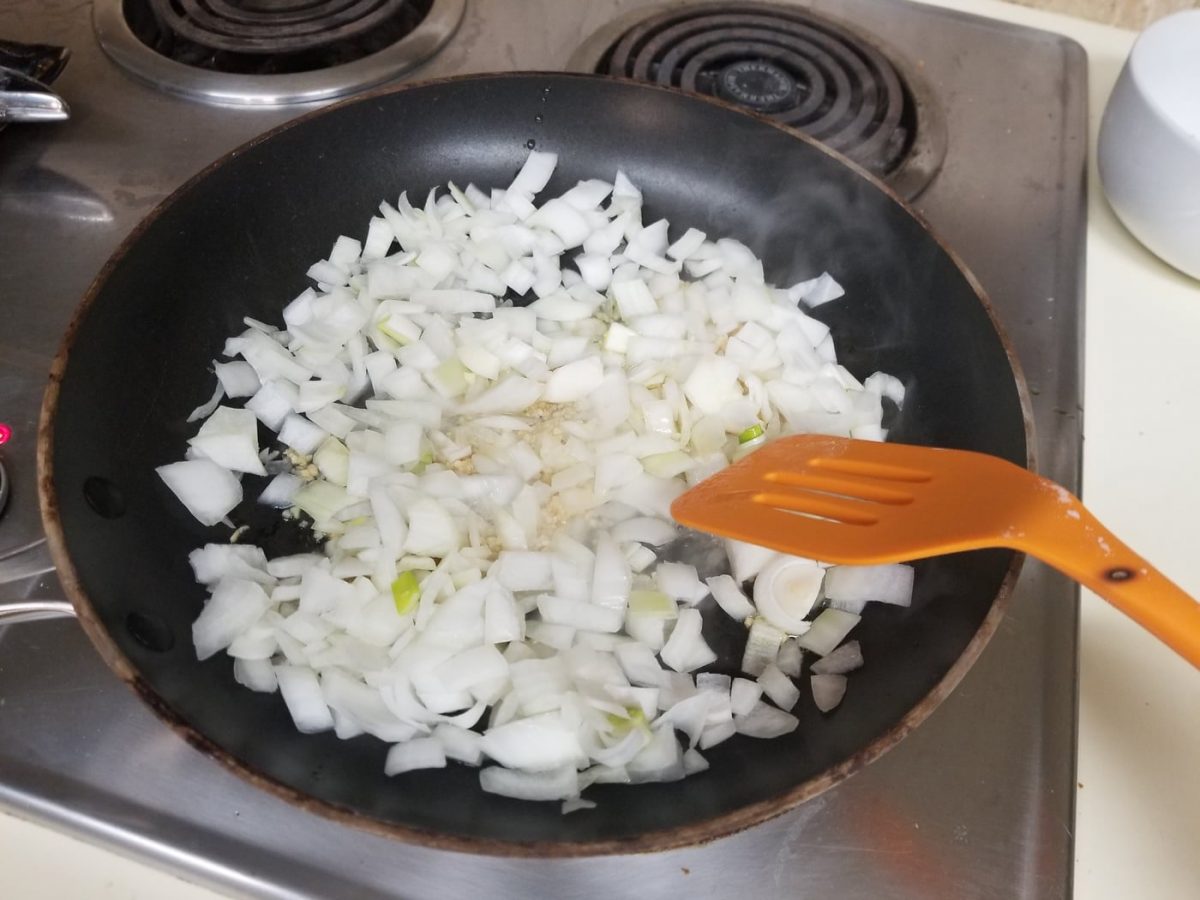 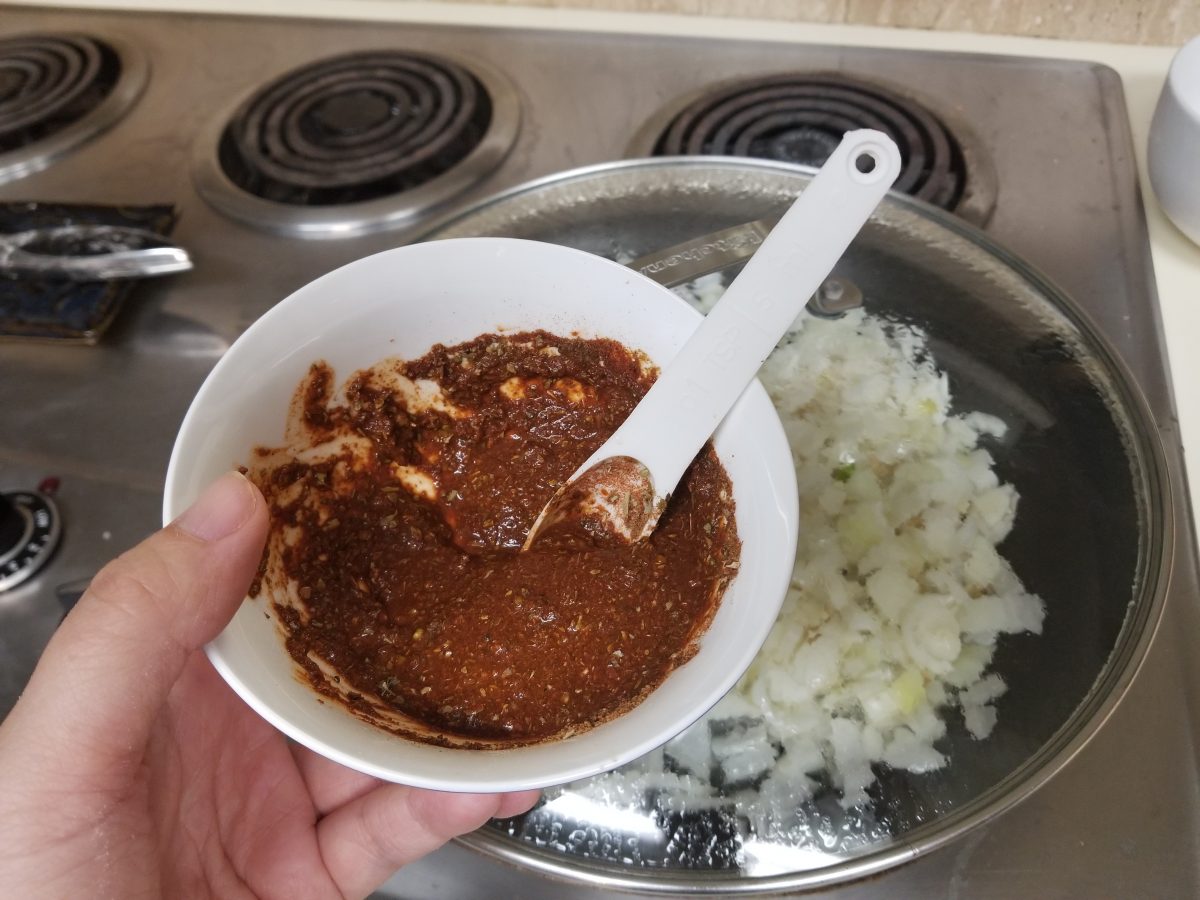 Stir in the spice mixture and fold in the 16 oz of mushrooms. 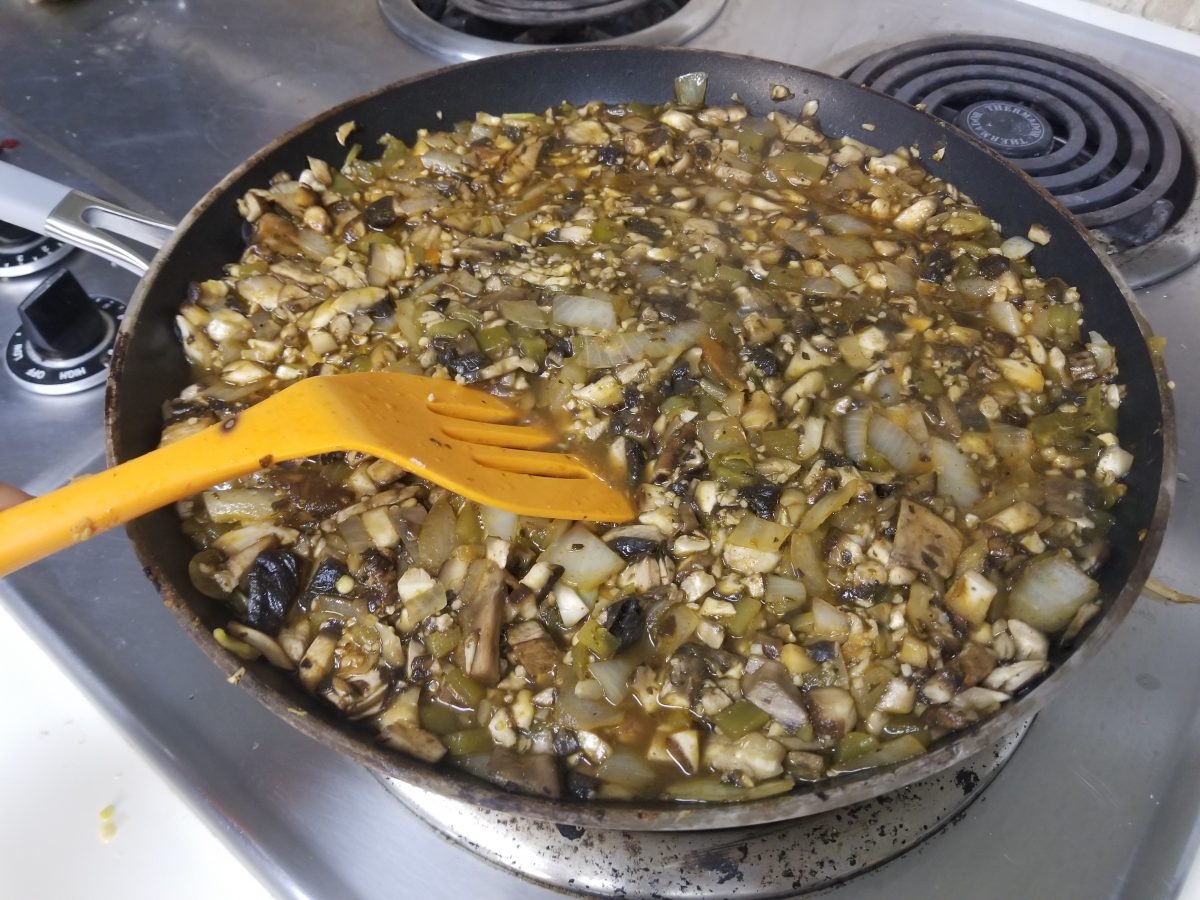 Cook the empanada filling on medium heat, uncovered, until the mushrooms have released their moisture and the moisture is mostly boiled off.

Once the filing is done cooking, remove it from the heat and set it aside until it is cool enough for you to handle with your bare hands. 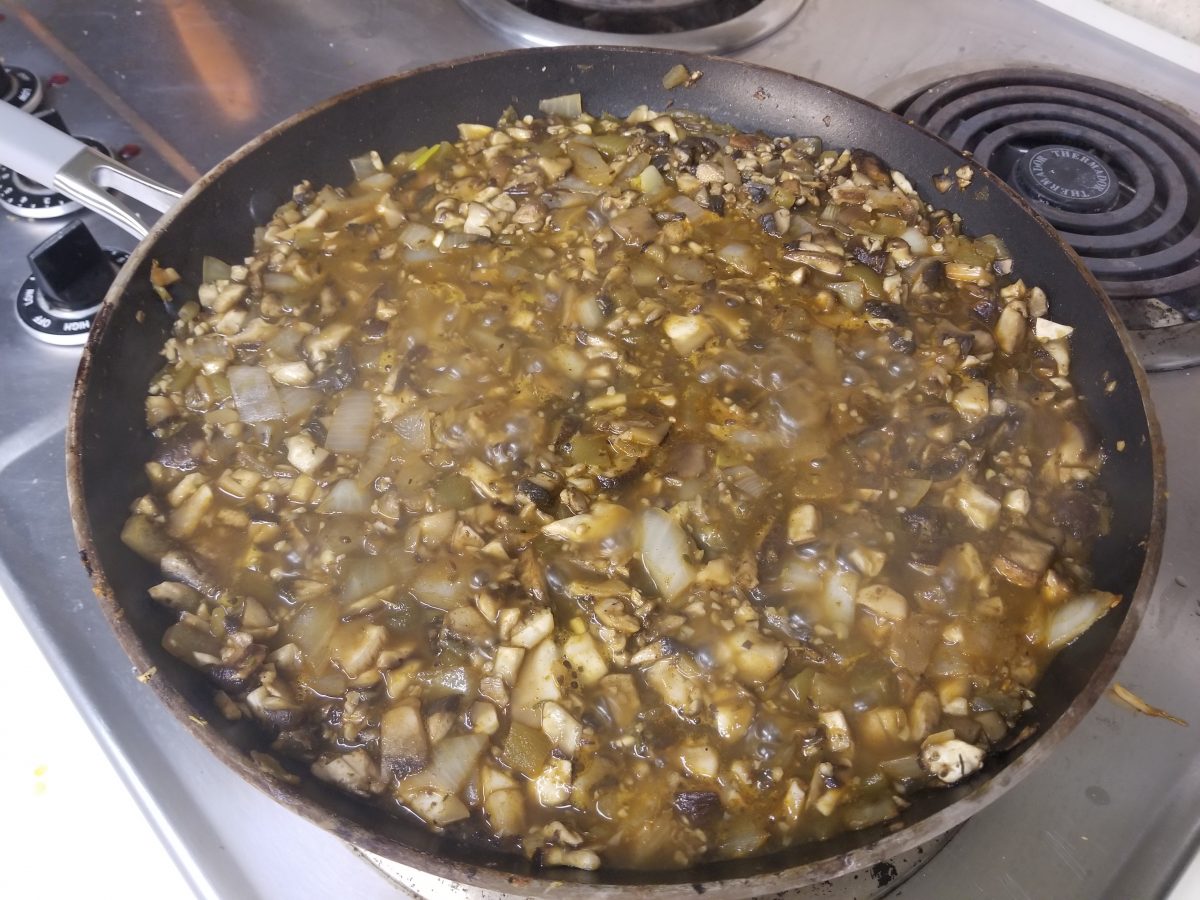 Once the filling is cool enough to handle, grab one of your chilled wheat wraps and spoon on 1/3 cup of the filling. 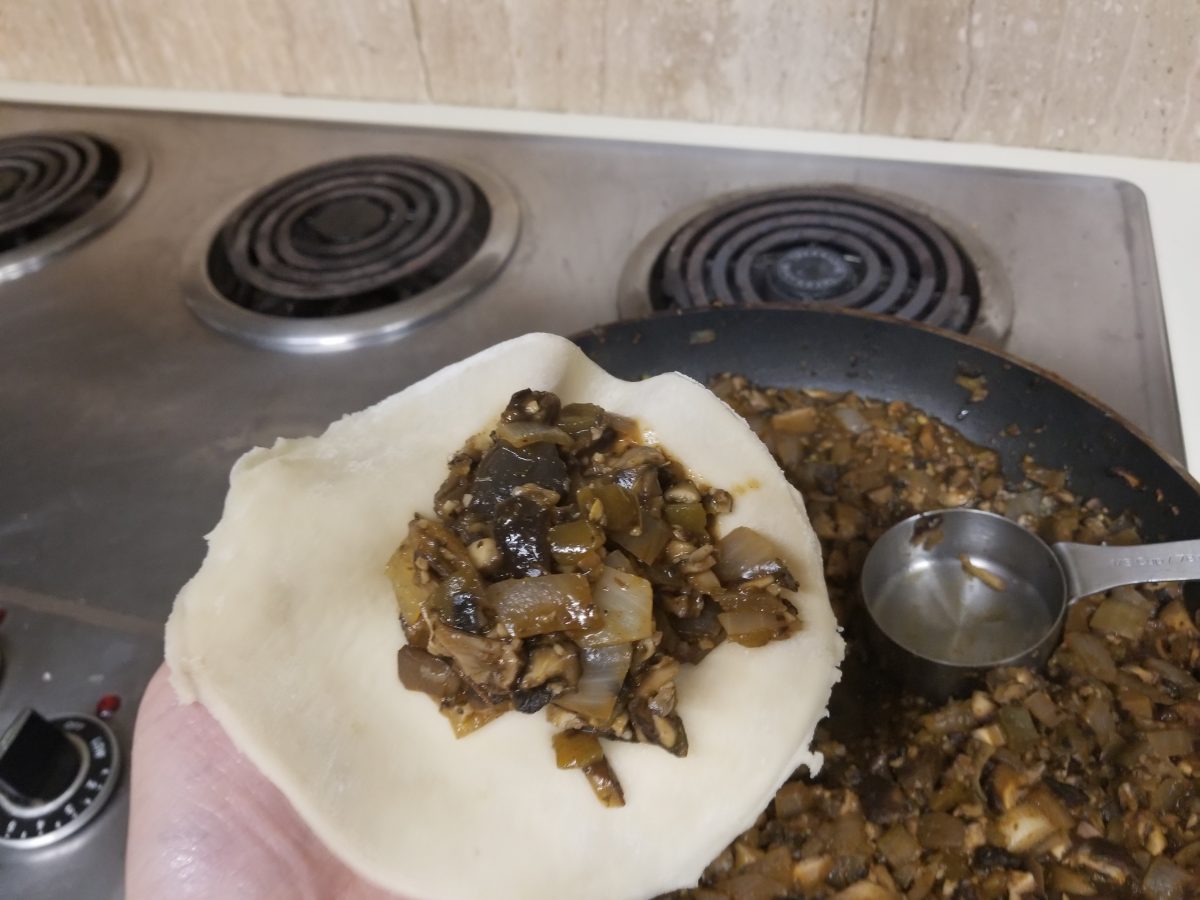 Fold the circle in half and pinch together the edges to make a seal. 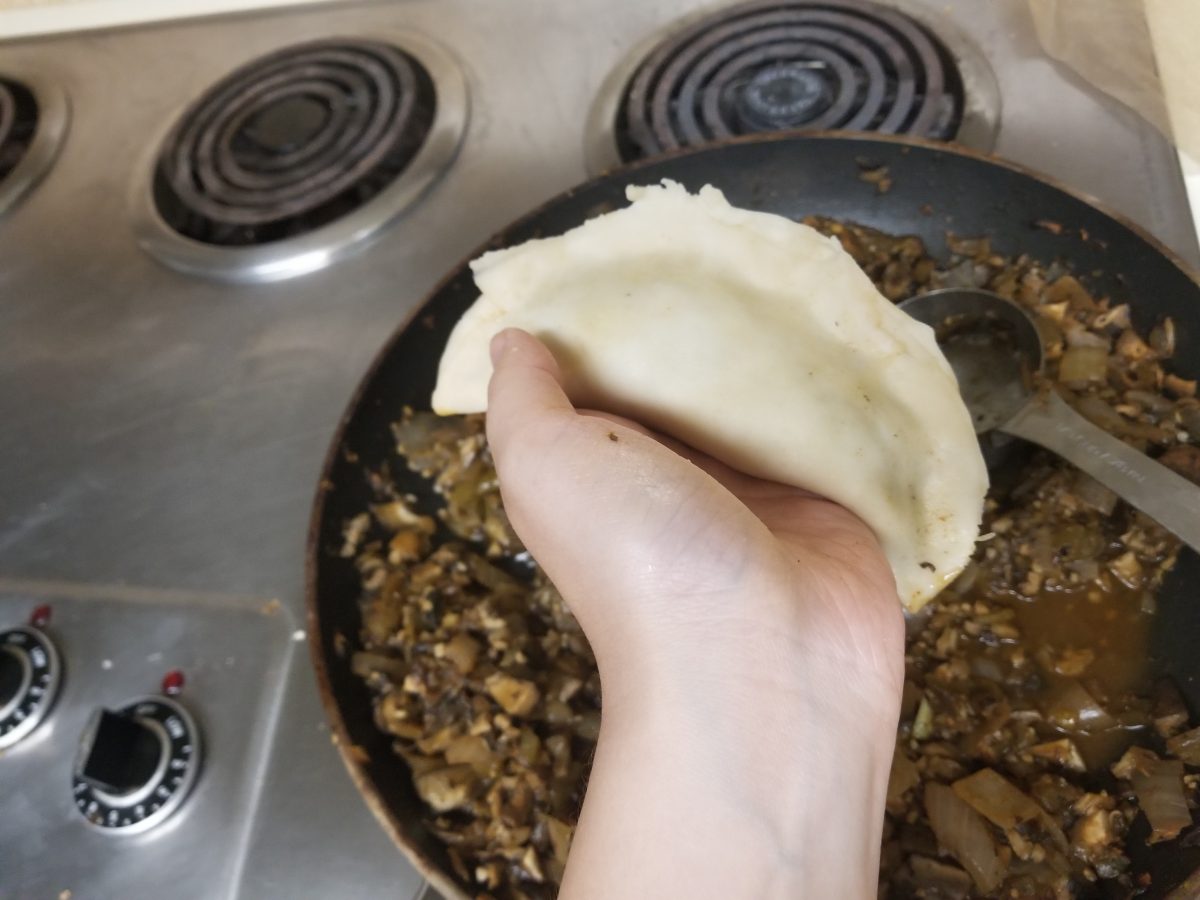 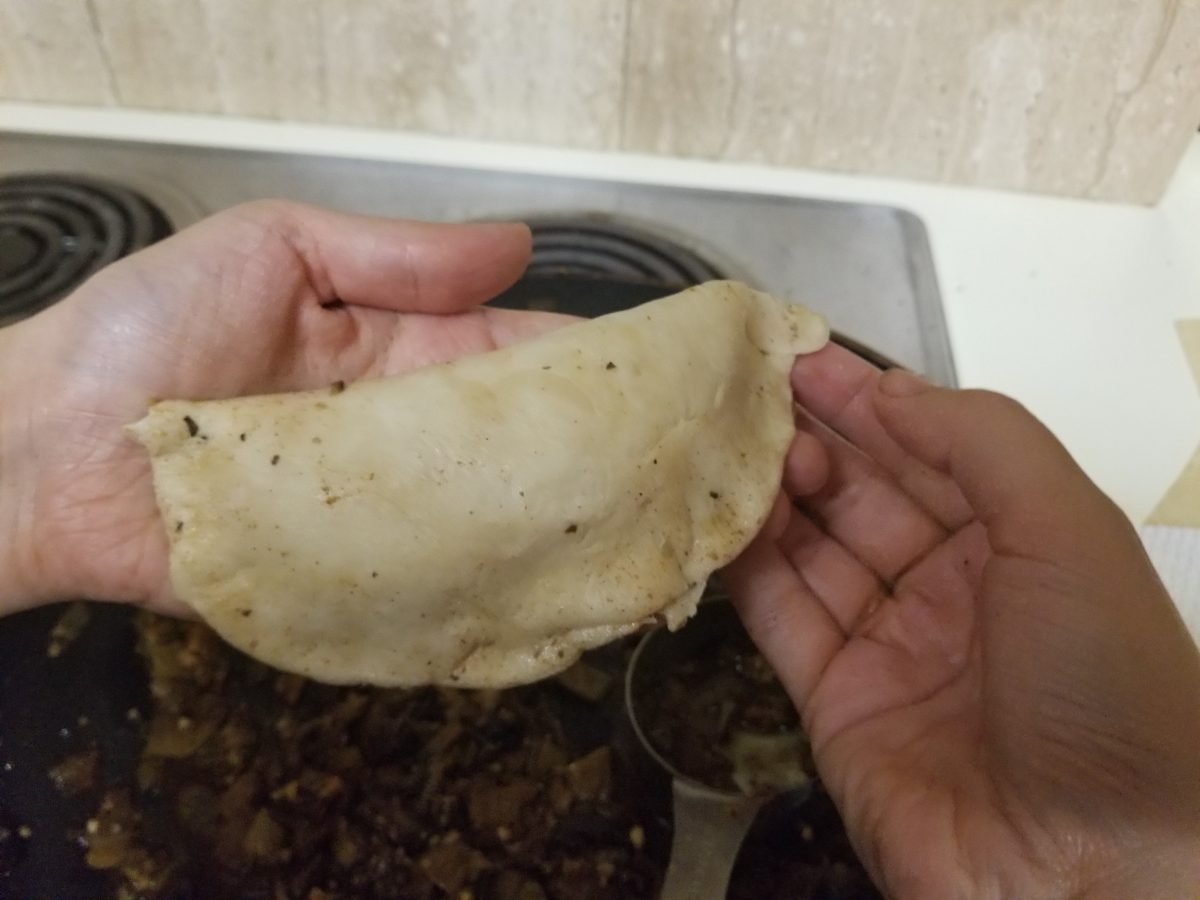 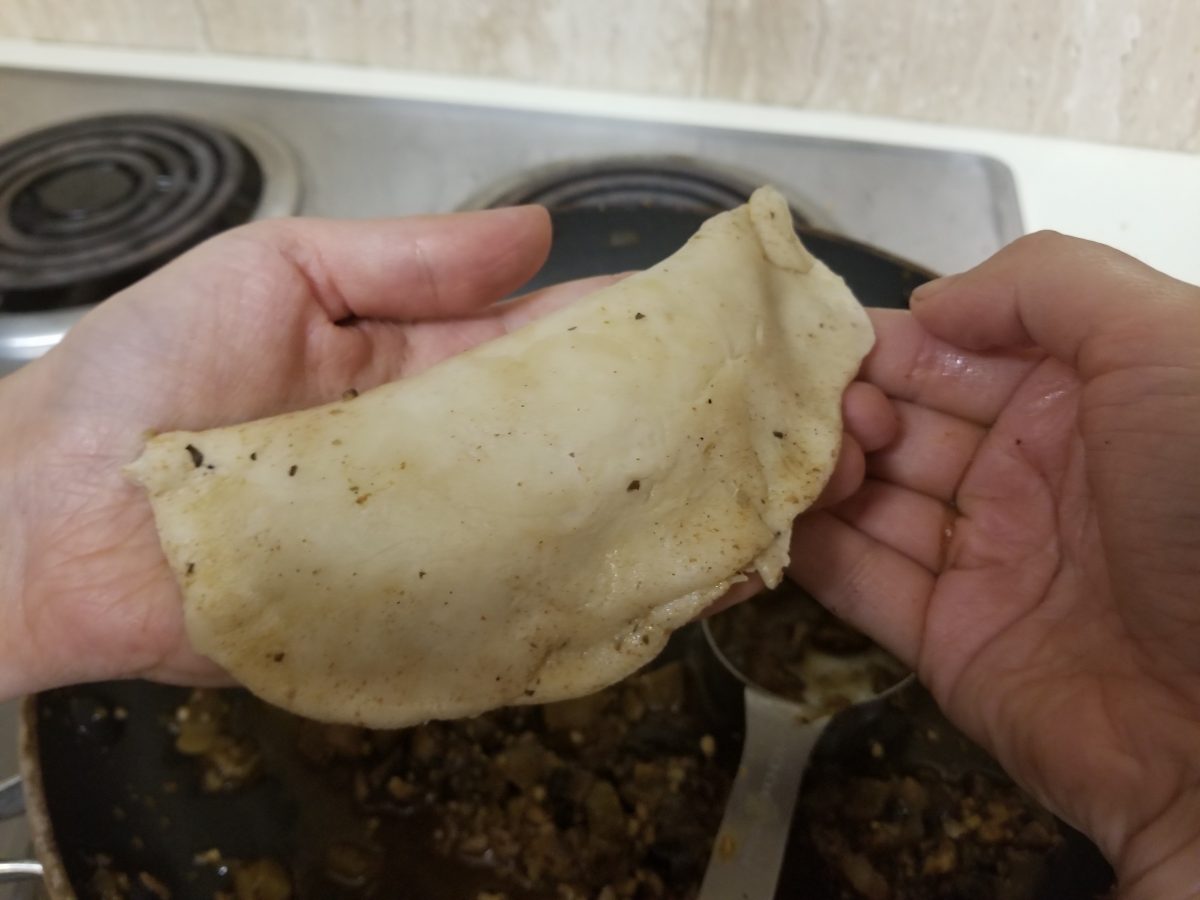 Continue this pinching, folding motion along the whole edge of the empanada. The overlapping folds will start to look like a twisted rope or the side of a braid. 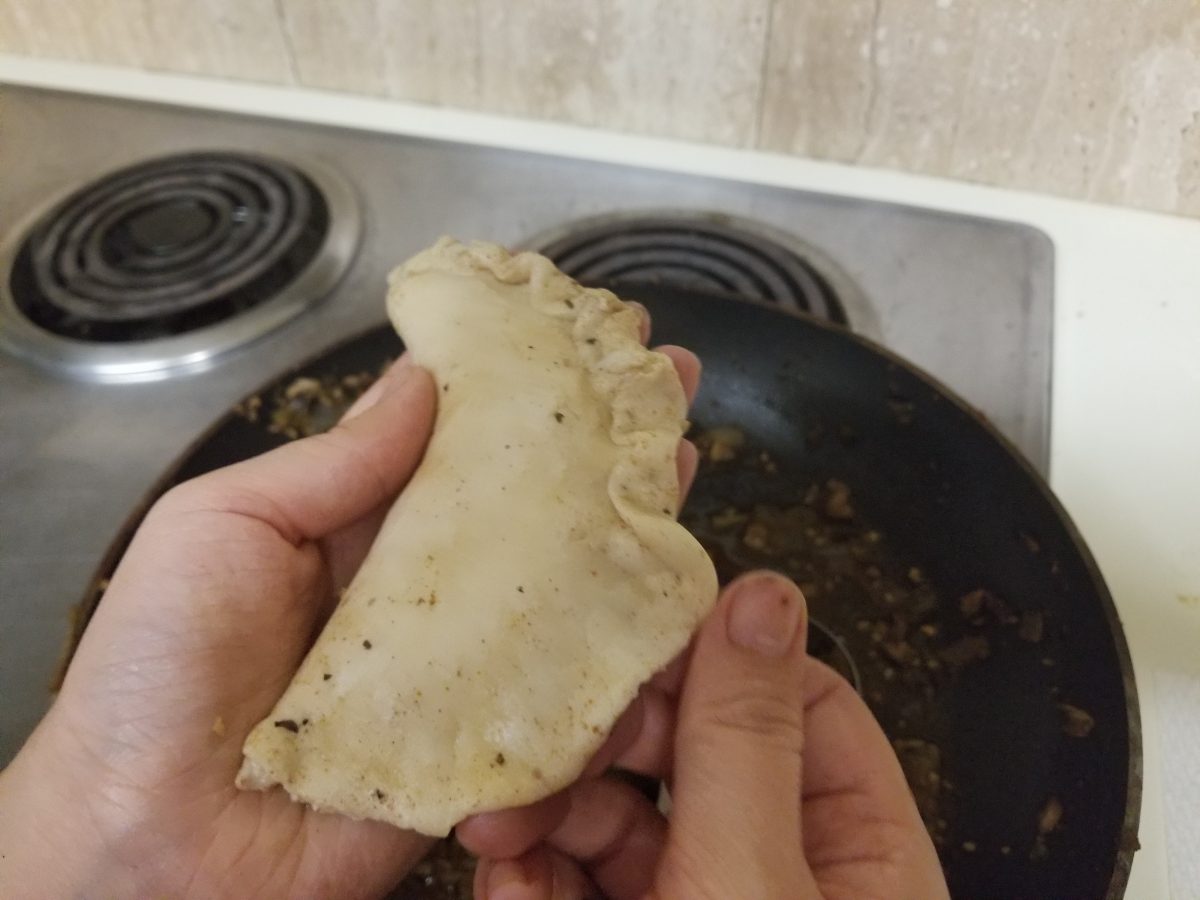 Fold the last flap when you reach the other second corner.

Repeat this for the other 11-13 dough rounds you have. Place the uncooked empanadas on a non-stick cooking surface like parchment paper or silicone. 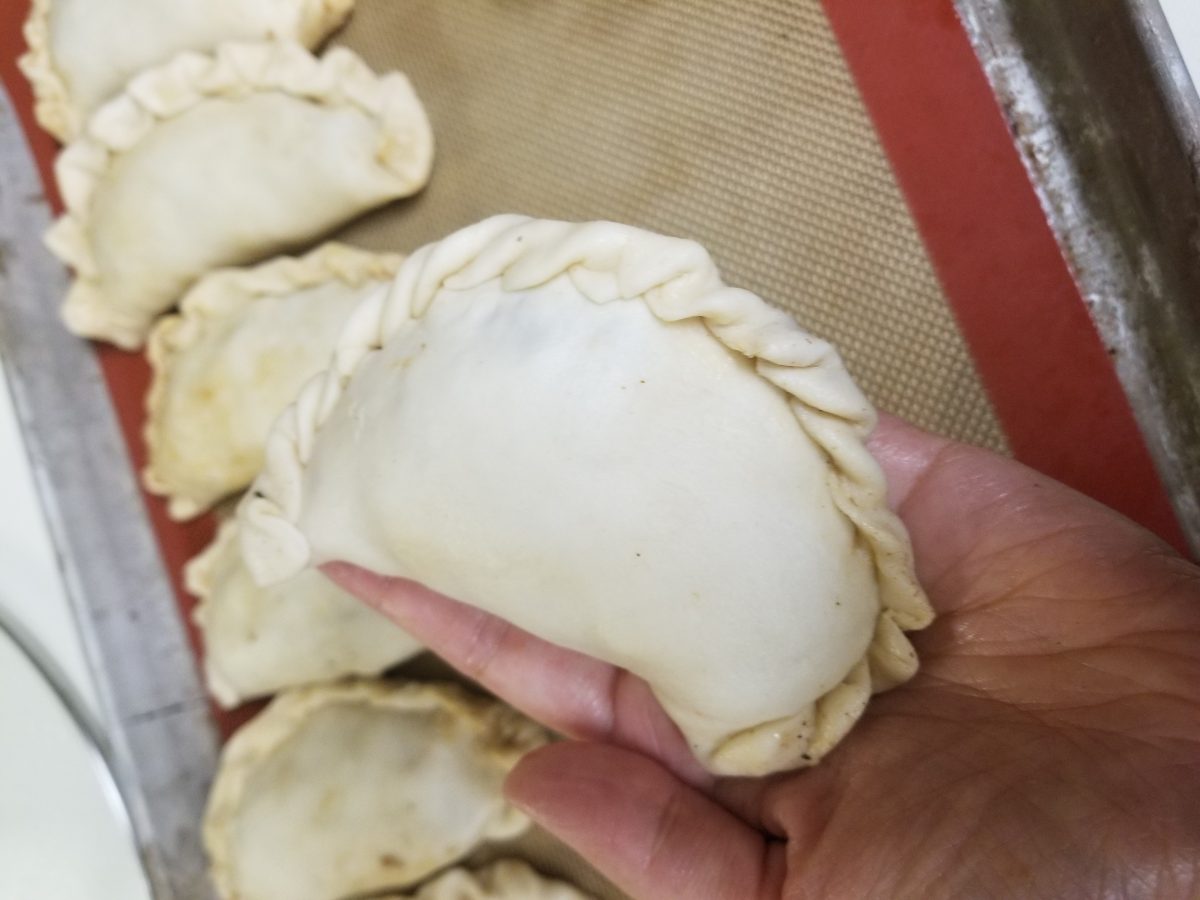 Generously brush each of the uncooked empanadas with soy creamer. The fat and acid from the creamer gives the outside of this flaky pastry a wonderful initial feel on the tongue. 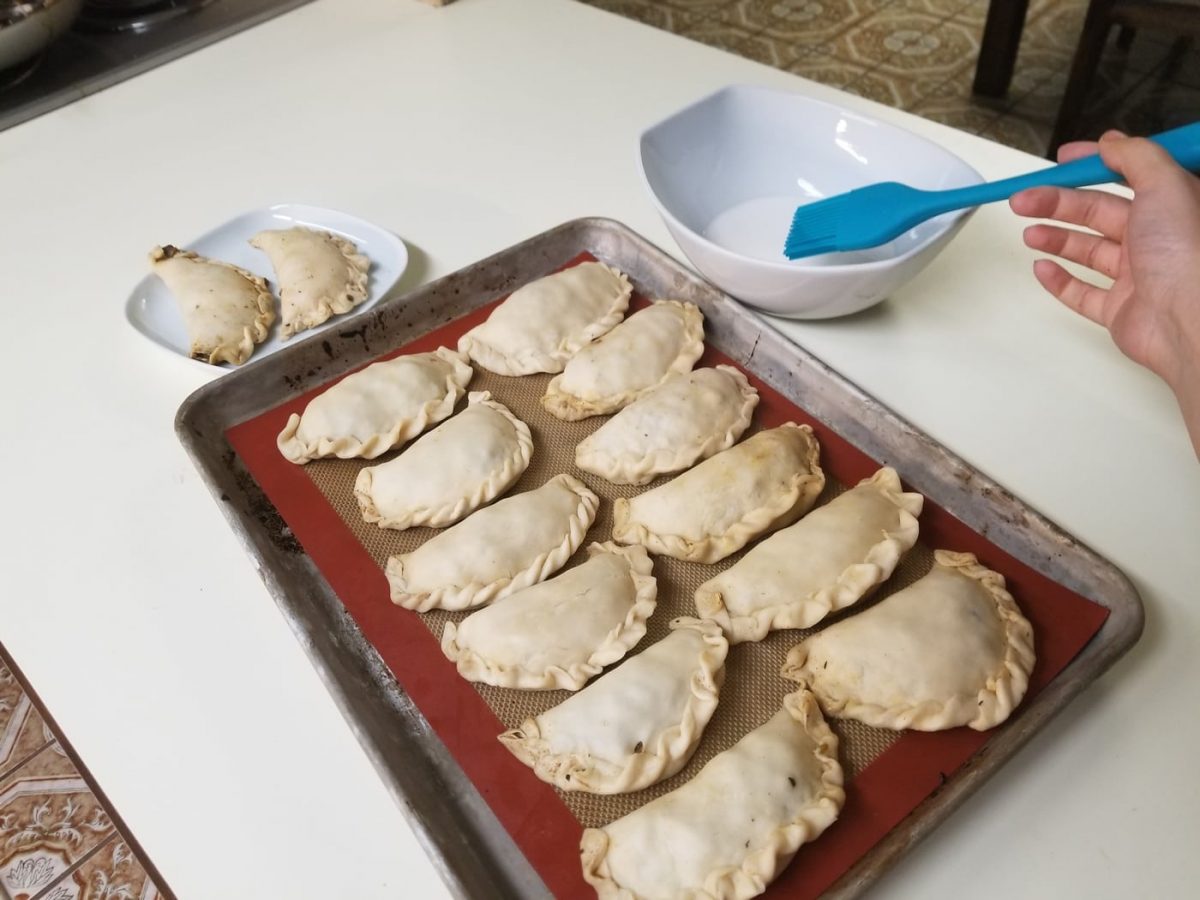 Bake the empanadas at 400°F for about 25 minutes, until the edges start to brown. 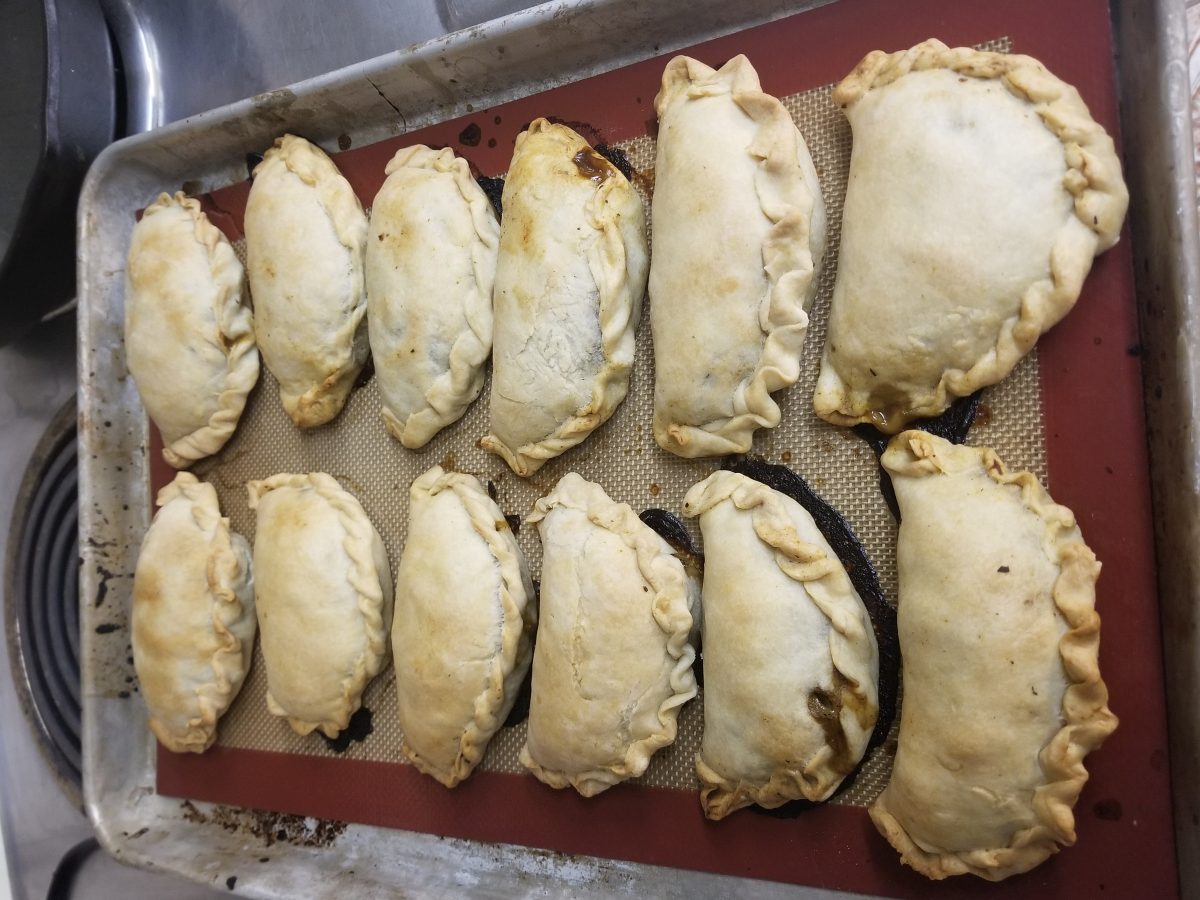 The bottom of the finished empanada should be brounded, dry, and crisp. 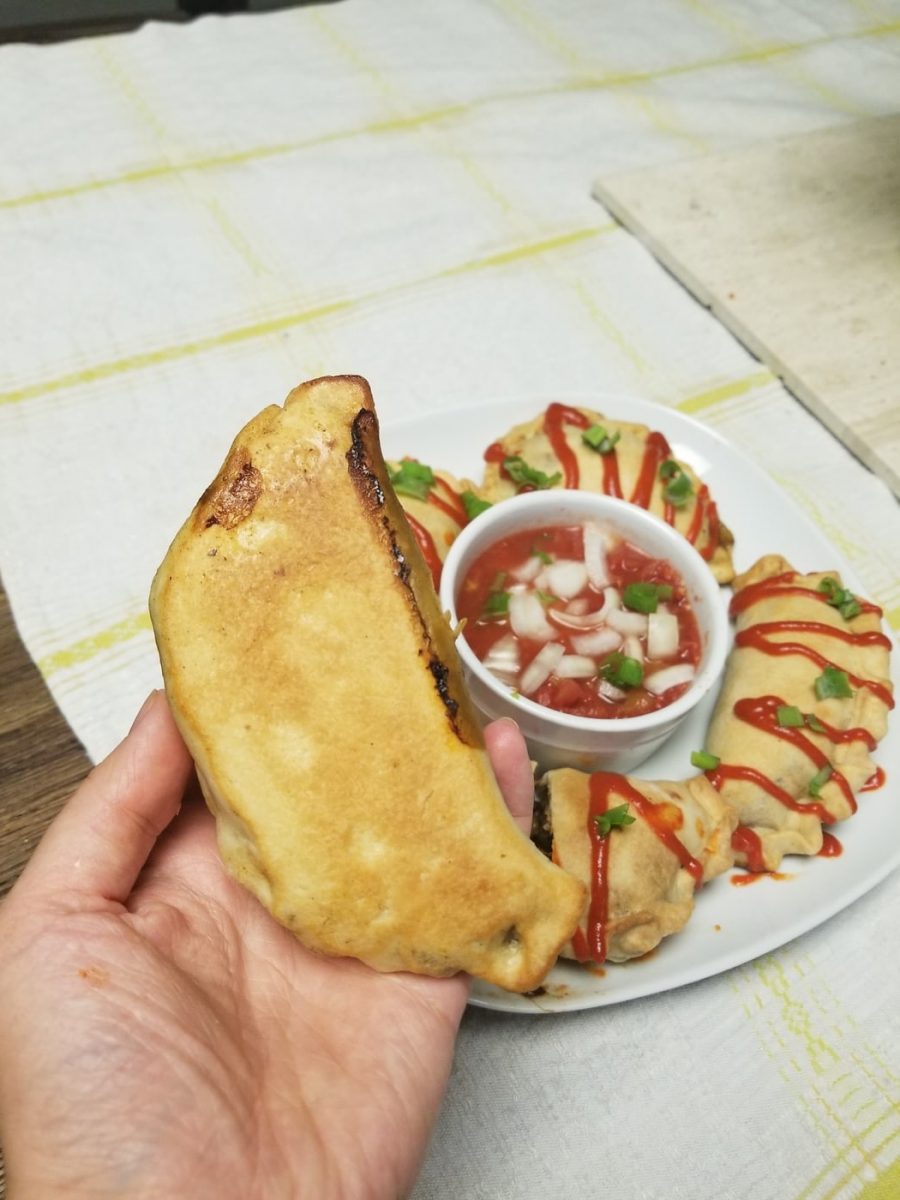 Allow the empanadas to cool for 8 minutes before serving. Biting into a boiling empanada will make your guests unable to taste the next one, even after it’s cooled ;)

Serve with your favorite salsa for dipping and garnishing. Enjoy! 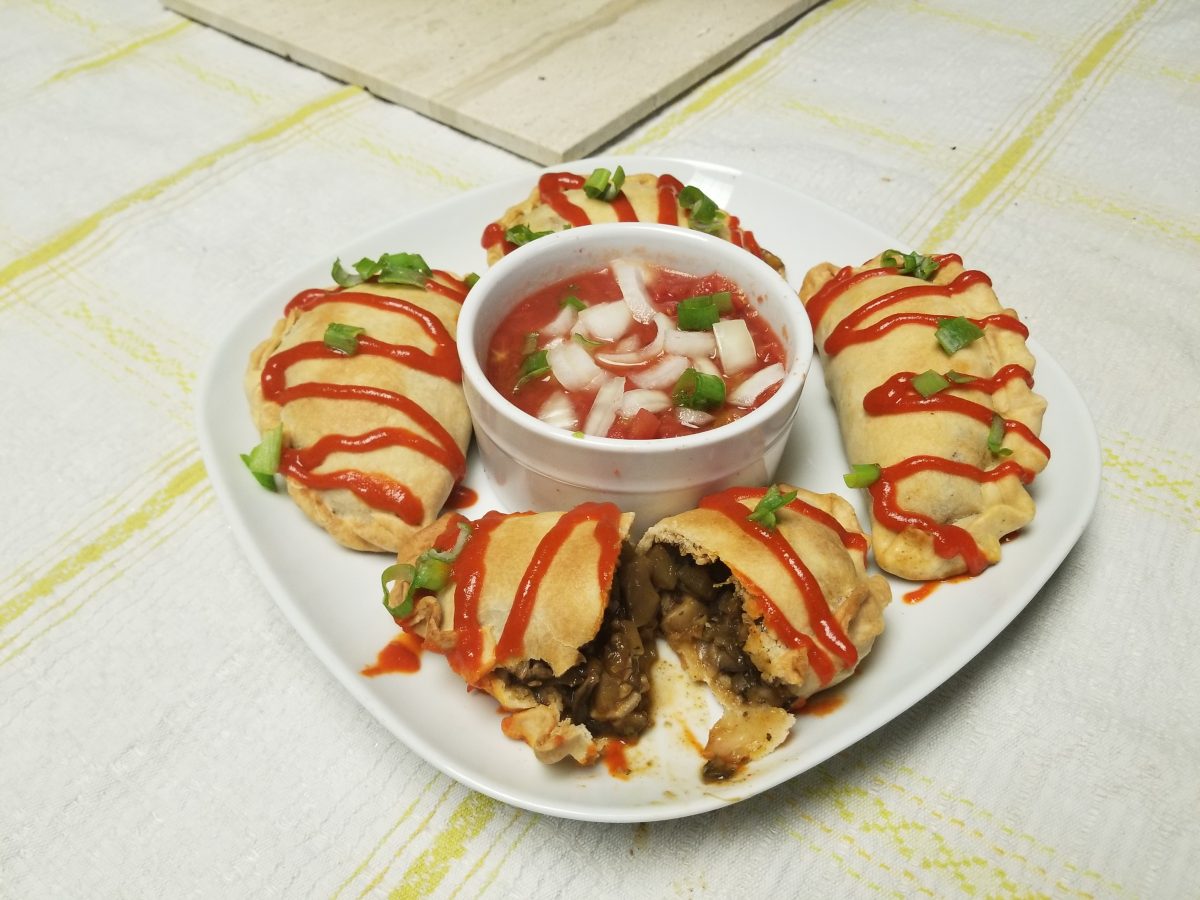